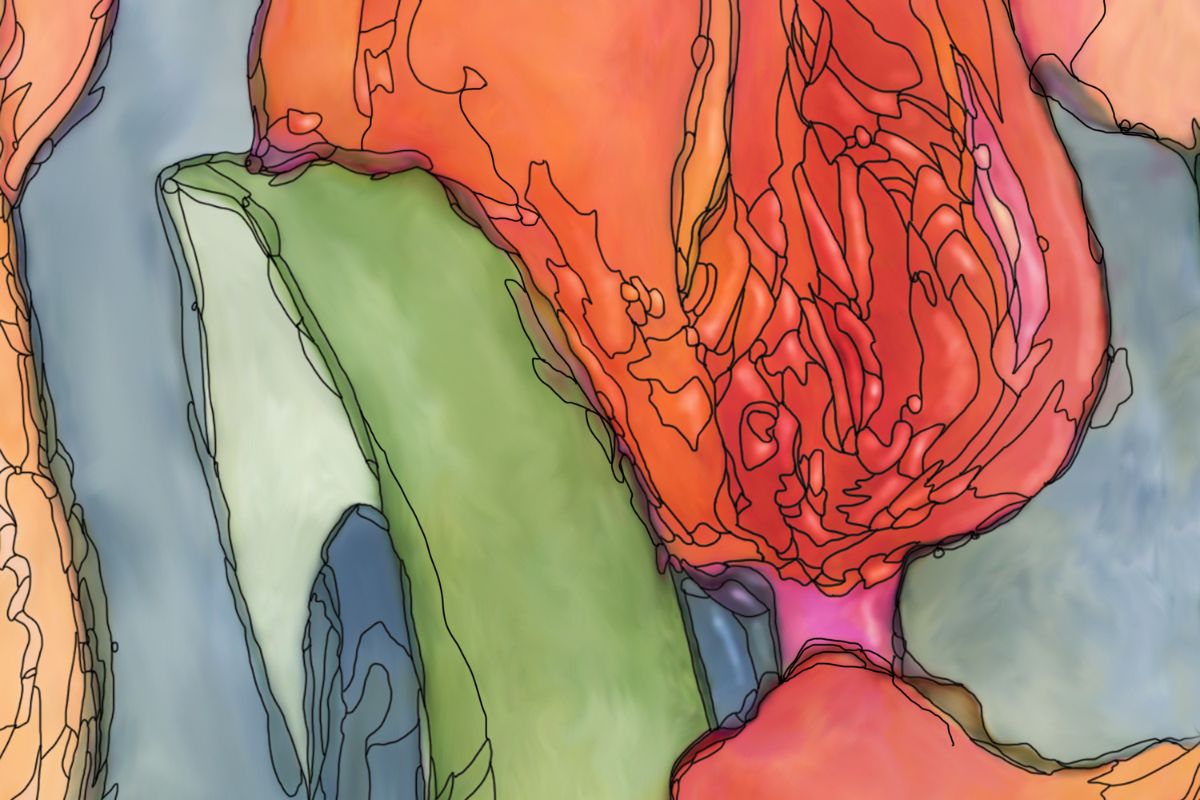 Abstractionism (Latin abstractio “removal, abstraction”) non-narrative art or in the English terminology Abstract Art – art that has abandoned the narrative. Abstract Art is manifested not only in painting and sculpture, but also in all other forms of art, primarily in music.

In 1910 in Murnau, Germany, Wassily Kandinsky painted his first abstract composition (watercolor), which is currently in the National Museum of Georgia. From Kandinsky’s recollections, he got the idea of abstract painting when he turned over a painting by Claude Monet and noticed that it looked better upside down.

The aesthetic concepts of the first abstractionists assumed that artistic creativity reflects the laws of the universe, hidden behind external, superficial phenomena of reality. These patterns, intuitively grasped by the artist, were expressed through the relationship of abstract forms .

In 1911, Alfred Stiglitz introduces Arthur Douve to the abstract works of Wassily Kandinsky, as a consequence in the period 1911-12 Arthur Douve creates a series of abstract pastel drawings, which were exhibited in 1912 at New York Photo Gallery “291” on 5th Avenue, this was not only the first exhibition of abstract art in America, but the first exhibition in world history that exhibited only works of abstract painting. From 1905 to 1917, A. Stiglitz was the director and owner of the “291” picture gallery.

In October 1912, at the Salon de la Section d’Or in Paris, František Kupka exhibited a full-fledged abstract oil painting of about 2 meters in size on a canvas entitled “Figure in Two Colors”.

in 1913 the Arsenal Exhibition was held in the United States in three cities (New York, Chicago, Boston) showing 1,250 works, 30% of which were brought from Europe and 70% were by American authors. About 300,000 people attended the exhibition. The Arsenal changed the way the American public looked at contemporary art and was a starting point for the development of modern art in the United States. This exhibition was initiated by Gertrude Whitney and Alfred Stiglitz.

In December 1915, the exhibition “0.10” (Zero-Ten) opened in Petrograd. At this exhibition, the painting “The Black Square” by Kazimir Malevich was exhibited.

In 1926, W.Kandinsky’s book “The Point and the Line on the Plane” was published, the book was first published in 1926 in Munich, in Albert Langen’s publishing house, the “Bauhaus Books” series, edited by Walter Gropius and Laszlo Moholy-Nagy. In this book, Wassily Kandinsky laid out his understanding of the theory of abstract painting. In the opening pages of the book, the author states that his book is the first attempt in world history to begin to create a scientifically grounded theory of art, that it is only the first step in the study of the complex and infinite, objectively existing, laws of formation and perception of abstract forms.

During the 1920s and 30s, the main and only major concentration center for abstractionist artists in the world was Paris.

On 19 July 1937 the exhibition Entartete Kunst (Degenerate Art) was opened in Munich – about 650 works of modern art confiscated from 32 museums in Germany were on display. The exhibition toured 12 cities in Germany and was visited by 3 million viewers (such an attendance record was surpassed only in the 2000s). At the end of the exhibition all works of abstract and semi-abstract art were destroyed as artifacts of alien anti-German culture.

In the late 1940s, after being discriminated against by the Nazis and Communists, many European abstractionist artists emigrated to the United States, New York became the new world center for abstract art, the United States was the first place in American history where advanced contemporary art emerged, represented by both immigrants and those born in America. Artists of this wave went down in history as the “New York School”. Jackson Pollock, Mark Rothko, Barnett Newman, Clifford Still, Mark Tobey, Franz Kline, Willem de Kooning, Arshile Gorky, they proclaimed their method to be “unconscious” and automatic creativity, unpredictability of effects (“action painting”). In their aesthetic concepts, objectless composition became a self-sufficient object that excluded associations with reality.

In the 1960s and 1970s, op-art, which developed the principles of geometric abstraction, using optical illusions of perception of flat and spatial objects, became a noticeable trend in abstractionism – Bridget Riley, Victor Vasarely.

Another offshoot of abstract art appearing at the same time was minimalism – Barnett Newman, Sol Levitt.

In the 1980s and 1990s, the crisis of the postmodern spread to abstract art. Many curators and artists of that time expressed the idea that the end of the history of painting had come, and that nothing new would be created that was comparable in importance to the paintings of the great abstractionists of the 20th century. At this time nothing fundamentally new emerged, their creative “abstractionist path” continued artists from the 1960s, such as Arnulf Rainer, Gerhard Richter, Jerry Zenyuk, Bryce Marden, Ivan Marchuk, Bridget Riley, Cy Twombly, Elsworth Kelly, Yuri Zlotnikov.

During this period, a new concept of The New New Art emerges, that is, new art emerging after the crisis of the postmodern.

Since the beginning of the 21st century monumental abstract paintings in the form of graffiti and murals have become a new mass phenomenon. Although the phenomenon of urban graffiti itself appeared in the 1960s, abstract forms of graffiti began to develop en masse only at the turn of the 20th and 21st centuries.

In its artistic essence graffiti and murals are one and the same, the mural differs from graffiti in its opposite legal status. The difference is that graffiti is when an artist finds a wall on his own and draws it without the consent of the owner, and mural is its opposite, that is art agreed with the owner of the wall.

Decisive factor for the emergence of a new abstract graffiti culture was the mass introduction of the Internet, artists from all over the world for the first time in history got a quick access to relevant information. The global exchange of artistic ideas began to happen very quickly and pulled in social groups for whom access to information about contemporary art was not possible in the pre-Internet era.

The new artists, drawing with spray paint on city walls and sketches on computers, were radically different in lifestyle and creative methods from the abstractionists of previous generations, and as a consequence, they opened up new horizons of art, behind which new forms and new artistic techniques manifested themselves.

In the 2010s, a fundamentally new direction of abstract painting was parametricism. The term “parametricism” was first introduced to the masses after the publication of Patrick Schumacher’s book “The Parametric Manifesto” published in 2008. In this book, Patrick Schumacher argues that parametricism, which emerged in the 1990s as a new style based on new principles of computer modeling, is a new global style to replace the Art Nouveau style. New forms of abstract parametric painting emerged as a result of the fusion of the parametric architectural experience and the experience accumulated throughout the history of painting, not only in its abstract period. Now it is difficult to name the outstanding artists of abstract parametricism, but they are definitely there and most of them appeared in the 2010s, although several first parametric abstractions, or rather abstractions with parametric elements, were created back in the 2000s. What is known for sure is that until the year 2000 there was no parametricism in painting.

Resin Art is another new phenomenon in abstract painting that emerged in this decade of the 21st century. Resin Art is close to color-field painting, direct-action art, and at its core is a new kind of abstract expressionism and a concept akin to Jackson Pollock’s concept, with the technology of Resin Art painting naturally gravitating towards the forms inherent to parametricism.

This decade saw the emergence of Instagram, which plays a special role in the dissemination of current information about the state of the world’s abstract art. Approximately since 2018 Instagram has become a social network with maximum audience involvement, comparable to Facebook and YouTube. There was nothing like this before the emergence of developed Instagram, Instagram is a conceptually new kind of information distribution, allowing us to see the evolution of abstract art not only in real time, but also strongly influencing the formation of a new structure of the expert community, which inevitably affects the vector of abstractionism development, and as a result becomes a factor in the emergence of new art. The role of popular Instagram-bloggers for the history of the development of abstract art is similar to the role of music radio stations after World War 2. For the first time in history abstract art is becoming publicly available, just as music records broadcast over the radio became publicly available. Instagram’s similarity to Radio Stations is its ease of accessibility; searching for Instagram bloggers on a smartphone is as easy as searching for music radio stations with a radio. As a consequence, abstract art has become accessible to most social groups that before the advent of the Internet and Instagram were in an information blockade; back in the 1990s, almost 100% of those who were interested in the topic of abstract art were in such partial or complete information blockade (almost 100%, that’s a lot more than 99%). Instagram differs from the global Internet in that it is much easier to navigate than the global Internet.

The first important historical event of the new decade is the opening of the first Museum of Graffiti in Miami on December 12, 2019, many of the artists of this museum are representatives of abstract art.

You can find up-to-date information about what’s happening with abstract art right now on social media and sites linked to ArtFire, that is, contemporary art fairs, the most important ArtFairs being ART BASEL, ART FRIEZE and the Venice Biennale. Also the latest art history is manifested in the most mature art galleries dealing with abstraction, having their representation all over the world, for instance White Cube Art Gallery, Gagosian Gallery, Saatchi Gallery. The largest museums in the world specializing in abstract art are Tate Modern, Pompidou Center, Solomon R. Guggenheim Museum, New York Museum of Modern Art, New Museum of Modern Art in New York and Whitney Museum of American Art.

At present there are four abstract art centers in the world with all the infrastructure necessary to support and develop abstract art – London, Paris, New York and Los-Angeles.